~M~ characters 0 or 1, where 0 denotes an empty square which should be filled by answering a question and 1 denotes an initially filled square which may contain at most two questions as explained in the task description. The first row and first column will be filled with 1 characters.

It is guaranteed that there will be at least one character 0 in the input.

In the first line you should output the minimal number of questions that can be answered in order to solve an entire crossword puzzle. Let's denote that number with

~X~ lines should describe one question that should be answered. The question description should be printed in the format R C direction, where

~R~ is the row number of the question,

~C~ is the column number of the question and direction is either DESNO (Croatian for RIGHT) or DOLJE (Croatian for DOWN) depending on whether Dragica should answer the vertical or horizontal question.

If there are multiple solutions, output any of them.

If your solution outputs the first line correctly on each test case of a subtask, but it fails to correctly output the other lines in some test case, you will score

~50\%~ of the allocated points for that subtask.

An example of a real crossword puzzle which is equivalent to the one described in this example is given on the next page. Initially-filled squares are colored black and those squares that contain at least one question are numerated. Below the puzzle you can see the questions that should be solved to-the-right (column "across") and those that should be solved downwards (column "down"). Note that some initially-filled squares contain no questions, some contain a single question (e.g.

~12~). In order to solve this crossword puzzle you need to know the answers to at least

~14~ questions that are listed in the output. Can you solve it? 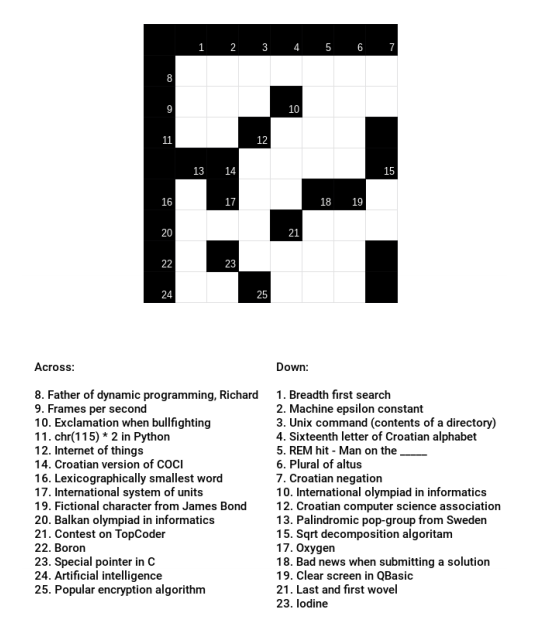