You are given a positive integer

~n~ and a sequence

The sequence parameterizes a tree with 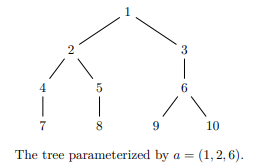 ~a_i~ has two children, and the rest of the vertices on the level have one child each.

We want to answer

~y~", i.e. the vertex with the largest label which is an ancestor of both

The second line contains a sequence of

where mod is the remainder of integer divison.

Remark: Note that if

~t = 1~, the queries are not known in advance, but are determined using answers to previous queries.

The tree from Sample Input 1 is shown on the figure in the statement.

The tree from Sample Input 2 is shown on the figure in the statement.

Labels of verticies in queries in the second example are: