The Mountain Amusement Park has opened a brand-new simulated roller coaster. The simulated track consists of

~0~. The figure on the next page illustrates two example track reconfigurations.

~h~. That is, the car will continue to travel as long as the elevation of the track does not exceed

~h~, and as long as the end of the track is not reached.

Given the record for all the day's rides and track configuration changes, compute for each ride the number of rails traversed by the car before it stops.

Internally, the simulator represents the track as a sequence of

~n~ elevation changes, one for each rail. The

~d_i~ represents the elevation change (in centimetres) over the

~i~-th rail. Suppose that after traversing

~i-1~ rails the car has reached an elevation of

~i~ rails the car will have reached an elevation of

Initially the rails are horizontal; that is,

~D~. The segment to be adjusted consists of rails

~b~ (inclusive). The elevation change over each rail in the segment is set to

Each ride is specified by one number

~h~ — the maximum height that the car can reach.

Write a program that:

The first line of input contains one positive integer

The input contains no more than 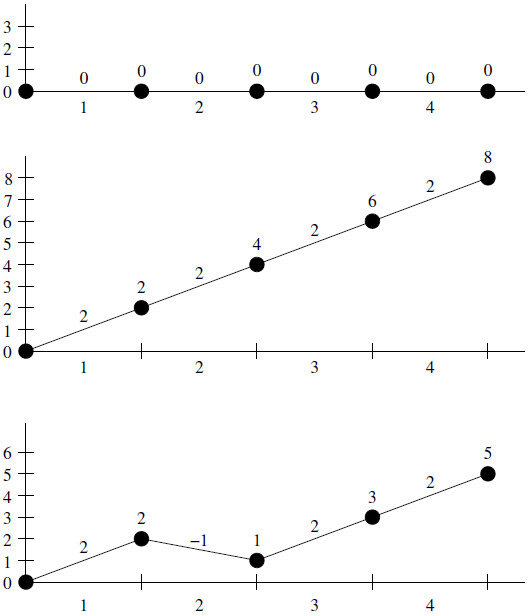 Views of the track before and after each reconfiguration. The