~A~) on the left shore of a river, and would like to cross over to the stone pier on the opposite shore (labeled 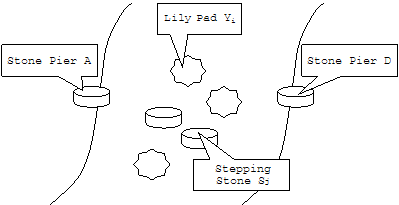 The rules for the frogs' formation and movements are as follows:

The frogs wish to eventually be able to all move to

~D~, while maintaining their proper formation.

~n~ stepping stones. Please find the maximum number of frogs which, under the formation and movement rules, can cross over from

~S_1~), and there are at most 4 frogs that can cross the river (ordered by size from smallest to largest, labeled

In this example, when there is one lily pad and one stepping stone, 4 frogs can cross over in 9 steps.

The input consists of two lines, each containing a single integer. The first line contains

~n~, the number of stepping stones

~m~, the number of lily pads

The output should contain one integer, the maximum number of frogs that can cross the river when there are