City P is a famous tourist attraction in country M. Under the leadership of Mayor G, the people live and work peacefully in the thriving city. However, Mayor G has not once been carried away by his achievements. His clear head is very aware that there are still some issues that exist in the governance of the city. One of these issues is traffic problems. 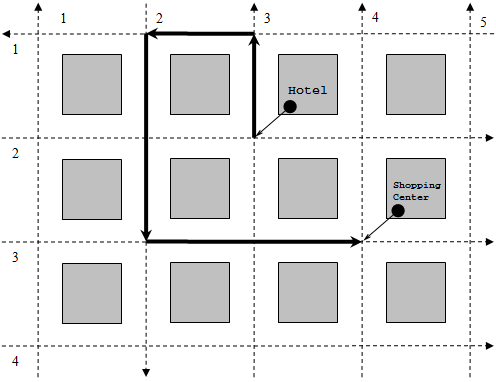 This limitation is a major inconvenience for traffic. As can be seen in the above figure, tourists may, for example, wish to go from their hotel to the shopping center. However, due to the one-way streets, they have to travel in a big circle to reach their destination.

This problem has been puzzling Mayor G for a while now. Every day, he will receive many letters from tourists, complaining about city P's unreasonable traffic system. Due to the large number of streets, he and his councilmen are still unable to solve this problem.

Fortunately, this problem can soon be resolved. This is because recently, he has paid good money to hire the world-renowned traffic engineer, Mr. B, to renovate city P's traffic system for efficiency.

Mr. B knows that the problem cannot be solved by expanding the width of the streets, since this will impact the various tourist attractions located along each side of the streets. So, he prepares to reassign the directions of some one-way streets to maximize the satisfaction of everyone.

Mr. B assigned labels to each street in city P. The horizontal streets are labeled with the numbers

~1, 2, \dots, m~, in order from north to south. The vertical streets are labeled with the numbers

Additionally, changing the direction of each street requires a fixed working cost. The size of working costs depend on the streets. Mr. B not only wants to find a valid plan, but he also wants the total working cost of this plan to be minimized. Can you help him?

~m~ representing the revised directions of the horizontal streets in order from north to south (output E for east, W for west), and the fourth line should contain a string of length

~n~ representing the revised directions of the vertical streets in order from west to east (output N for north, S for south).

Your score out of 10 for each test case is determined as follows: