~1~. Thus, the root node itself will have a depth of

Now, given each node's key, priority, and access frequency, you may modify the priority of some number of nodes at an additional modification cost of

~K~ for each node's priority changed. You may change the priority of nodes to any real number, but the change must ensure that the priorities of all the nodes afterwards remain distinct. The problem you must solve is, determine the minimum possible sum of the entire tree's access frequency and the total modification cost.

~N~ is the number of nodes and

~K~ is the modification cost for each priority value changed.
The next line contains

~N~ nonnegative integers, the keys of all the nodes.
The next line contains

~N~ nonnegative integers, the priorities of all the nodes.
The next line contains

~400\,000~. Pairs of adjacent values on the same line will be separated by a single integer, and there will not be any trailing spaces.

The output should consist of one line containing a single number, the minimum possible value achievable for the sum of the entire tree's access cost and the total modification cost.

The left diagram below depicts the original tree in the sample input. Its overall access cost is 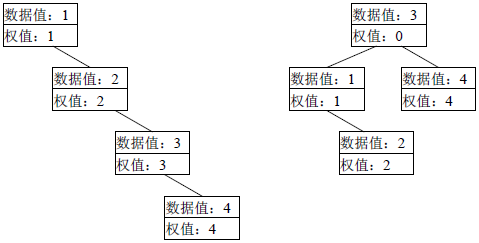 40% of the test cases satisfy