City YT is a well-designed city. The main roads that run east-west and north-south divide the city into

~n \times n~ regions. Simply put, we can view city YT as a square with each region also being a square. From this, we know that city YT contains

~2 \times n \times (n + 1)~ bidirectional streets (simply referred to as streets). Each street connects a pair of intersections on a main road. The diagram below depicts a map of city YT 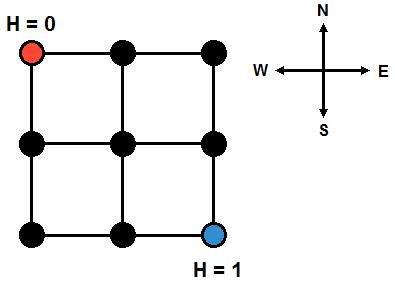 Little Z is the mayor of this city. Using statistical information, he has obtained the bidirectional flow rate of people in each street during rush hours. For the duration of each rush hour, he will know the number of people going in a specific direction on a specific street. Each intersection also possesses an altitude, which is an issue that citizens of city YT find very stressful. For a person to climb up to an altitude of

~h~ will require him to exhaust

~h~ units of energy. If going downhill, no energy will be required. When traveling along a street, if the difference between the destination altitude and the initial altitude is

~h~ can be negative), then a person will consume

~\max(0, h)~ units of energy when traveling along the street (here,

~\max(a, b)~ represents the largest of two numbers

~0~, and the altitude of the intersection at the south-east corner to be

~1~ (as depicted in the above diagram). However, there is no way to determine the altitudes of other intersections. Little Z would like to know in the most ideal situation (where you can freely assume altitudes for any intersection), what is the minimum total energy consumed by people climbing the slopes during rush hour?

~n~, the meaning of which is described above.
For the following

~4 \times n \times (n + 1)~ lines, each line contains a nonnegative integer representing the number of people (i.e. the flow rate) passing through a particular street in a particular direction during rush hour.
The input order is:

Output a single number, the minimum possible total energy consumption of all people traveling during rush hour if the altitudes were ideal. Round the answer (half-up) to the nearest integers.

The following diagram depicts the scenario in the sample above. It also indicates the altitudes in an ideal situation. 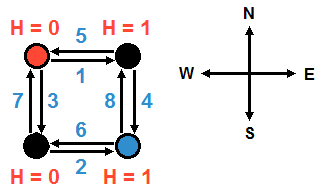 Altitudes may not necessarily be integers.