This summer, NOI is celebrating her 30th birthday in city SZ. The OIers from

~n~ cities across the nation will arrive in city SZ to participate in the celebration.

~n~ cities in the nation form a tree rooted at city SZ. Each city is connected to its parent by a road. For the sake of simplicity, we have numbered the

~n~ cities with unique integers from

~1~. Outside of city SZ itself, any city

~v~ will have a parent denoted by

~f_v~, connected by a road of length

~v~ to city SZ can be done in the following way: Select an ancestor

~v~, pay the ticket cost, and take the public transit to city

~a~. Then, pick ancestor

~a~, pay the ticket, and travel there. Repeat this process until city SZ is reached.

~l_v~ on the distance of the public transit. For an ancestor

~v~, if and only if the total distance of all the roads between

~v~ does not exceed

~l_v~, then it's possible to go straight to city

~v~ by buying one ticket. For each city

~q_v~ as the ticket price parameters. If we let the total distance of all roads from

~d~, then the ticket cost to travel from

~t~, respectively representing the number of cities and the type of the test case (explained below).
Lines 2 to

~n~ of the input will each describe a city outside of city SZ. Line

~v~, the length of the road to its parent, the ticket price parameters, and the distance limit.
Note: the input will not contain city SZ which is numbered

~n~ will respectively represents the cities numbered from 2 to

~v + 1~ to city SZ.
Note again: the output should not include city SZ which is numbered

Refer to the diagram below: 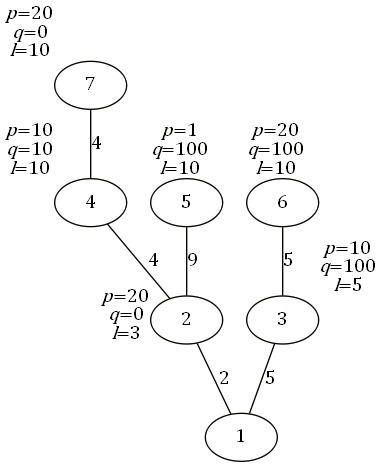 The paths to travel to SZ from every city is outlined as follows (where arrows represent a single, direct trip):
City 2: Only

All of the test cases satisfy

~l_v = 2\times 10^{11}~. That is, there will be no distance limit for traveling between cities – every city will be able to reach every one of its ancestors.
When

~t = 3~, there will be no special characteristics for the test case.
The sizes of

~t~ for each test case are summarized as follows.

The input and output requires 64-bit integers. If your calculations require operating on two 64-bit integers, be careful of whether the result will overflow.