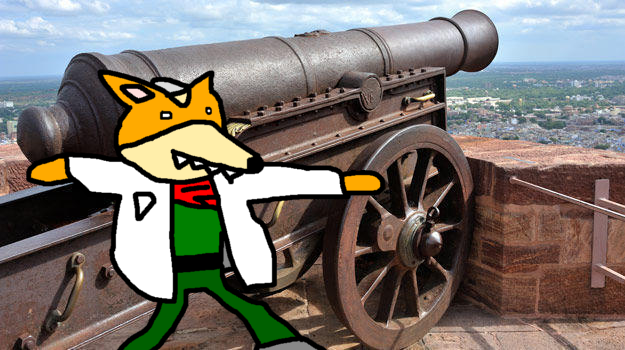 Today, Fax is in charge of firing a large space cannon as part of the Remembrance Day ceremony. However, he needs to make sure that no planets are in danger. In particular, there are

~P~ planets that he needs to be aware of; the

~(x_i,y_i)~. No two planets will be located at the same point or at

The cannon projectile's path can be modeled using an

~V~, the projectile explodes and ceases to exist. The explosion is in the shape of a circle with a radius of

Fax needs to ensure that no planet is on the path of the cannon projectile and that no planet is caught in the final explosion area, even at the edge. Can you help Fax to determine how many planets are in danger?

The first line of input will contain four space-separated integers,

~V~, inclusive), the absolute value of

On a single line, output the number of planets in the path of the cannon projectile or in the explosion area.

In the diagram, the blue curve represents the cannon projectile's path, the red circle represents the explosion area, and the black points represent the locations of planets. The planets located at