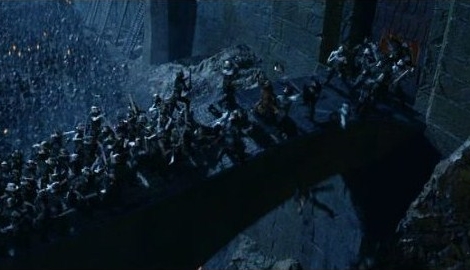 There's nothing like a bit of friendly competition, even when your life is on the line! Legolas and Gimli have taken to counting how many enemies they're each able to kill in each confrontation, in an effort to one-up one another.

During the battle of Helm's Deep, Legolas killed

~i^{th}~ of which had a strength level of

~i^{th}~ of which had a strength level of

Though Gimli killed fewer enemies than Legolas did, he's not about to admit defeat to the elf so easily. As such, he's gotten the idea to introduce a new rule: "All enemies with strength levels smaller than

~X~ no larger than

~X~ which would cause him to "win" (in other words, such that Gimli killed strictly more enemies with strength levels greater than or equal to

~X~ than Legolas did). If no possible value of

~X~ would have this result, output -1 instead.

~i^{th}~ of which consists of a single integer

~i^{th}~ of which consists of a single integer

Output a single integer, any valid value of

~X~ which would cause Gimli to win, or -1 if there's no such value.

In the first case, if

~3^{rd}~ killed enemies counting), while Gimli's score will be

~3~. Note that there exist other valid values of

~X~ which would also be accepted.

In the second case, if