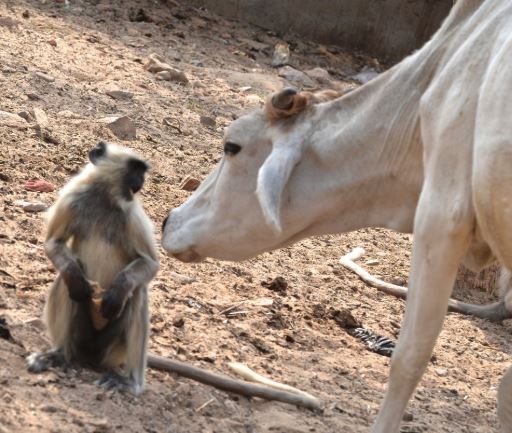 The Great Cow-Monkey War of 2017 has left Scarberia in a fragile and unstable state. Interspecies tension is at an all-time high, and both sides are working relentlessly to rebuild their economies, social systems, and militias. Little do the cows and monkeys know that amidst the turmoil, the world is at risk of being taken over by an even more dangerous foe — a group of aliens known as the Party of Extraterrestrial Gangsters (or PEG for short)! PEG has decided that it's the perfect time to divide and conquer Scarberia by exploiting its current internal hostilities. Fortunately, Bo Vine and the Head-Monkey have learned of the impending invasion in time, and an important realization has dawned on them: now is not the time to engage in petty quarrels with one another. All of Scarberia must unite, at least temporarily, to face an even greater evil. The animals have thus formed a truce, and started to plan for the upcoming war!

With an overall battle formation decided, the cows and monkeys are now ready to fight against the incoming alien invaders! …Well, almost. You see, the commanders realized that it is not too effective to simply line up large platoons of uniformly cows or uniformly monkeys. They must work together at a more local scale, with each cow and monkey taking immediate advantage of each others' strengths and weaknesses. As such, the commanders have decided to pair up cows and monkeys to form individual combat units on the battlefield.

Between the united armies, there are

~i~-th cow has a combat skill level of

~i~-th monkey has a combat skill level of

~N~ combat units total and each of the

~2N~ animals is a part of exactly one unit.

~D~ denote the maximum combat skill differential across all

~N~ combat units. Bo Vine and the Head-Monkey would like to pair up the animals such that

~D~ ends up being as small as possible. Can you help them determine the minimum possible value of

~D~ which can be achieved?

~N~.
The second line consists of

Output a single integer, the minimum possible value of

~D~ which can be achieved.

One possible optimal arrangement is to pair:

The maximum of these differentials is