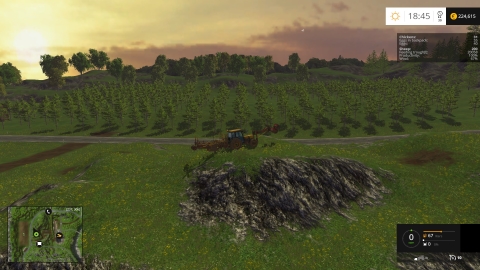 When Billy needs an extra dose of excitement in his life, he looks no further than to one of his favourite video game series, Farming Simulator. It's filled with wonderful games, though Farming Simulator 16 takes the cake.

Billy's farm in Farming Simulator 16 includes a certain long stretch of dirt, which can be represented as a number line. Billy's currently standing at position

~0~ along the stretch, while his farmhouse is at position

~i~-th of which is at a distinct position

~1~ unit per second, and he may also choose to stand still at any point. He'd like to walk around and get a tree growing in each of the

~N~ holes, before ending up at his farmhouse!

Getting a tree growing in the

~i~-th hole is a two-step process. First, at any point in time when Billy is at position

~P_{i}~, he may instantly plant a seed in the hole. Then, at any point in time at least

~P_{i}~, he may instantly water the seed to make it start growing. Note that the minimum waiting time

~W_{i}~ may differ from hole to hole, due to realistically complex details of dirt composition.

~N~ holes, and then end up at position

Output a single integer, the minimum number of seconds required for Billy to complete his task.

One optimal strategy for Billy is as follows: