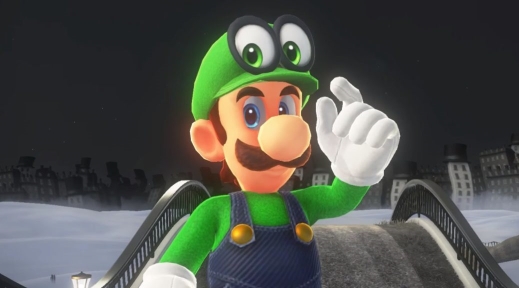 Billy has been having a great time playing a demo of Nintendo's next highly-anticipated 3D platforming game, Super Luigi Odyssey.

One challenge in the game sees Luigi trapped in a long hallway, which can be represented as a number line with positions increasing towards the rightwards direction. There are

~1~ (note that this is not necessarily the leftmost platform).

Much to Luigi's concern, the hallway is filled with some deadly lava. Initially, the lava reaches up to a height of

~0.5~ metres. At any point, a platform is considered to be submerged in lava if the lava's height exceeds the platform's height.

~i~-th event is described by the integer

Even if Billy manages to keep Luigi alive through all

~M~ events, he may not be out of the woods yet — his success in later challenges will depend on how much of Luigi's energy has been spent. Whenever Luigi jumps from platform

~(1 \le K \le 2)~ units of energy. Note that the amount of energy required doesn't depend on the platforms' relative heights.

Help Billy determine how much energy Luigi will expend throughout all

~M~ events (if he will even survive that long). As this may amount to quite a few units of energy, you only need to determine the total modulo

Output a single integer, the total number of units of energy which Luigi will expend (modulo

In the first case, Luigi will be forced to jump along the follow sequence of positions:

In total, these jumps require

~K~ were equal to

~186~ units of energy would be required instead.

In the second case, after the lava's height is raised to

~1.5~ metres, Luigi will have no non-submerged platform to jump to on his right, and so will be forced to jump into the lava and perish.