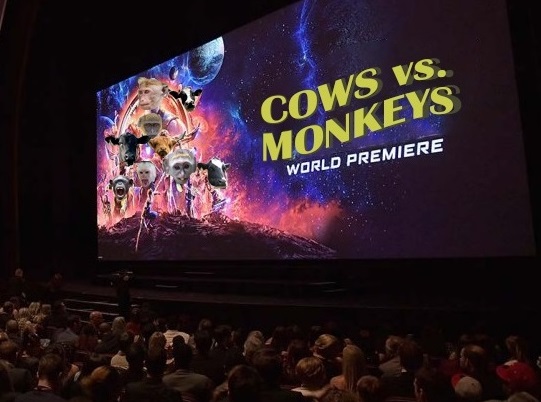 At last, the time has come for months of hard work to finally pay off- the cows' and monkeys' production is hitting the big screen this weekend!

It will be playing at movie theatres in

~N~ in increasing order of their theatres' quality. There are

~N-1~ roads running amongst these cities, the

~(1 \le A_i, B_i \le N, A_i \ne B_i)~. However, each road also passes through a tunnel which imposes a limit on the heights of vehicles which may drive along it - in particular, a vehicle may only travel along the

~i~-th road if its height is at most

~i~-th one living in city

~(1 \le H_i \le 10^9)~. However, they won't necessarily settle for watching the film in their own cities — they're prepared to drive wherever it takes to get the best possible movie-watching experience! However, they're also not great at planning ahead, so each moviegoer will follow this simple procedure:

The Head Monkey and Bo Vine want to make sure that each theatre has enough seats available for its screening- nobody should be left out from witnessing their masterpiece! In order to help estimate audience sizes, determine which city each of the

~K~ moviegoers will end up stopping at to watch the film.

~12/34~ of the points, each city has at most two roads directly adjacent to it.

~i~-th of which consists of three space-separated integers,

~i~-th of which should consist of a single integer, the city at which moviegoer

~i~ will stop to watch the film, for

The first moviegoer will drive from city

~3~ and then remain there.
The second moviegoer will remain at city

~2~.
The third moviegoer will drive from city