Five in the morning. Daniel wakes up, he opens his eyes. His head hurts a bit. He can still hear the ringing in his ears.

He comes to realize that he has found himself at a playground, in a big metal box.

He remembers a similar situation he found himself in, three years ago, COCI round 2, task Kocka.

But this time, things are much more complicated... Daniel is in an

~n~ edges are scattered around him. It soon became clear to him that salvation lies in tiling the edges of the hypercube with the trees.

~\mathcal Q_n~ is a graph with nodes

~y~ are connected if and only if their bitwise xor is a power of two.

A tree can be placed on the hypercube so that:

Your task is to tile the hypercube

~\mathcal Q_n~ with as many copies of the given tree

Each of the following

~y~ are connected by an edge in tree

In the first line print the number of trees in your tiling.

~i^\text{th}~ tree is placed so that the hypercube node

If your solution correctly places

~k~ trees, you will receive

Of course, if your solution is not correct, you will receive 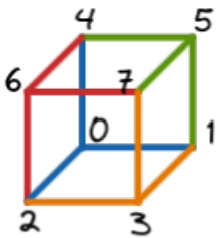