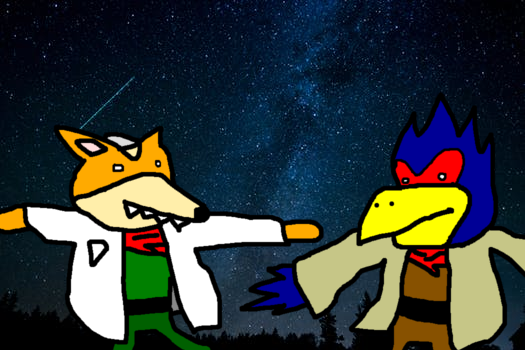 Fax and Flaco stargazing with their bare eyes.

Fax McClad, Croneria's most observant bounty hunter, is out stargazing with his wingmate Flaco.

Using purely his keen eyesight, Fax collects data about the countless planets in the sky. The sky can be represented as a 2D Cartesian plane, where each planet can only occupy a single point. No two planets will be located at the same point.

To begin, Fax records an arbitrary first planet. He does not know the exact position of this planet. He then picks another planet and records its difference in position relative to a previously recorded planet, repeating this process until ultimately, all planets have been picked. Occasionally, Fax may accidentally pick a new planet that has already been previously picked.

Given Fax's data, can you help him determine the number of distinct planets in the sky? That is, how many distinct locations of planets will Fax have recorded?

~Y~ coordinates of the

~i^{th}~ picked planet relative to the

~P_i^{th}~ picked planet.
Note that the difference between two values is calculated by the final value subtracting the initial value.

A single integer, the number of distinct planets in the sky.

Fax initially picks a first planet (that is not reflected in the input).
The second picked planet is located at

~(+7, +8)~ relative to the first planet.
The third picked planet is located at

~(+10, +10)~ relative to the first planet.
However, the fourth picked planet is also located at

~(+10, +10)~ relative to the first planet. Since this coincides with the third picked planet, Fax can ignore this measurement.
The fifth picked planet is located at